Whether it was working on innovative ideas for work, training for a half marathon, or strengthening his relationship with God, Zac was always focused on making himself a better person.

Zachary “Zac” Plantz was a Frankfort, IL native and a lifelong Chicago loyalist. While his time on Earth was limited, he maximized his 27 years by excelling at whatever life put in front of him, and ensuring he left his mark on this world. Zac had a knack for making old pals out of strangers, and anyone who spent five minutes with him knew why—he was engaging, gregarious, and charismatic; a true jokester. But there was also an altruism to Zac’s playful antics. His sincerity and warmth made him a shepherd of sorts for every odd-man-out, known to bridge the gap between old-timers and newcomers. Zac graduated near the top of his class at Providence Catholic High School, was an all-state football selection, and went on to earn a degree and become a rugby stand-out at the University of Notre Dame. He began his professional career in consulting, and, like everything else he did, found success in solving clients’ biggest problems while building an expansive professional network. At 25, Zac walked away from consulting to pursue his true passion, public service. He started building a name for himself in Chicago politics, working on local and state campaigns with future plans to attend law school. These career moves were stepping stones toward Zac’s ultimate life goal—to build a better city, a better country, and a better tomorrow for everyone he encountered along the way.

In the six years leading up to his death, Zac extended his attentiveness and passion to mental health advocacy. He left this earth with a dirty mustache that helped him single-handedly raise over $145,000 for the Movember Foundation, an organization dedicated to improving men’s physical and mental health. Zac was committed to fighting the stigma surrounding men’s mental health and used his Movember fundraising as a platform for raising awareness and encouraging vulnerability as a sign of strength. As part of this effort, Zac became an advocate for his own mental health, attending therapy and sharing his experiences openly with family and friends. We seek to further Zac’s efforts—shepherding the odd-man-out, championing education, leadership, and wellness. Zac was a leader in every sense of the word. Always at the head of the pack, he was a natural captain with a solid, commanding presence that others admired. He was honorable, authoritative, and would take initiative to make things happen, carrying others with his strength and conviction. Despite this charisma, Zac never had a problem taking the backseat to give others the opportunity to lead.

Amongst his rugby brothers, he was known for being the first person to take “hits” so that others could move forward in the game. And that spirit of self-sacrifice, teamwork, and camaraderie followed him off the rugby pitch. His groundedness gave him abundant “common sense” as well as the ability to be decisive. He was willing to “take the heat,” knowing that any decision could not please everyone. But as much as possible, he looked after the interests of the people in his charge without playing favorites. He was a champion of people, a provider and protector, and he used his intensity and power to plow a path for those who could not plow a path for themselves.

Zac’s Notre Dame and Providence communities were at the center of his life and he made fast friends with anyone he encountered. He was a natural born leader, but more importantly he was our glue. He was the substance that brought and held us all together. He was always the one planning the next get together and holding everyone to it–which really was a feat in and of itself because Zac had SO many friends. He always took care of us. Additionally, Zac’s signature “How we doin?” – shepherding the odd man out; encouraging open conversations with strangers and helping others, checking in on mental health, etc. Zac’s journey into adulthood came with a new sense of purpose: at 25, he walked away from a successful consulting career to pursue his true passion of public service. 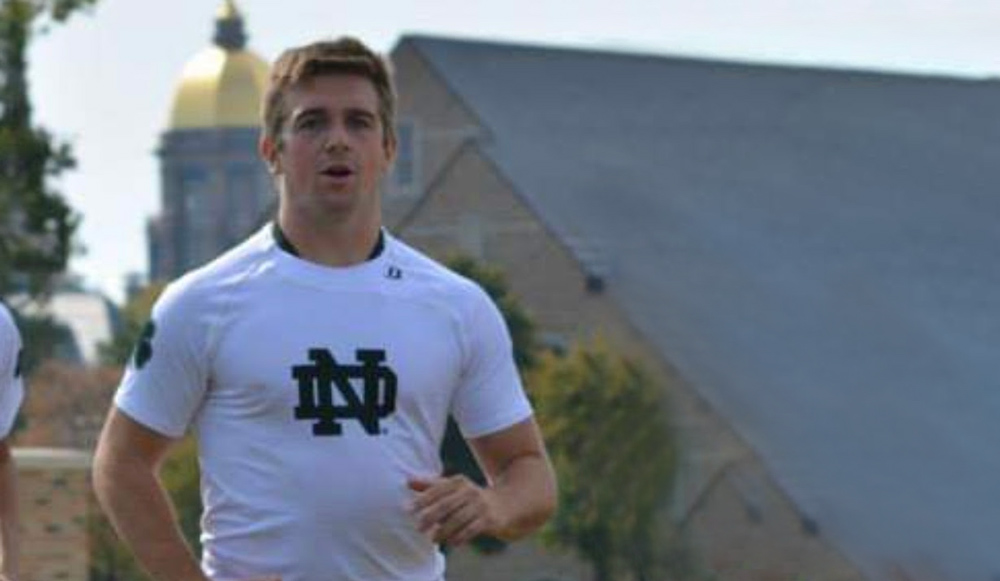 He had a resourceful, “can-do” attitude as well as a passionate inner drive. Every single second that he lived was filled with purpose and passion. Zac threw himself into whatever he believed in – his faith, his community of family and friends, and we support students who throw themselves into their hobbies, studies, or sports. I ask you to be the light in some one’s day and bring a fiery passion to everything that you do. But most importantly, I challenge you to take a leap of faith. Throughout Zac’s life he pushed the limits and took chances. In almost all situations he took the road less travelled, so I challenge you to live out his legacy by following your heart. Make the career shift you always wanted, call the person that means most to you, and leave nothing left in your tank like he did. Only put off until tomorrow what you are willing to die having left undone.

Zac had faith not only in a higher power but in himself and those around him. He had this way of making people feel important. He was a shepherd of sorts for every odd-man-out, known to bridge the gap between old-timers and newcomers: you likely knew Zac if you were ever an out-of-towner visiting a Morrissey dorm party or a rookie at the Plantz football tailgates. He had a knack for making old pals out of strangers, and anyone who spent five minutes with Zac knew why—he was engaging, gregarious, and charismatic. He was a fantastic cheerleader. He read a daily devotional every morning before work. He had tears in his eyes when the Cubs won the World Series. He poured himself into the things he cared about with his whole heart. In today’s world of chaos, become a person of Faith. In your own way become something greater than just yourself. You will soon realize there is no greater feeling than to have GOD in your corner. Zac was fun to his core. A well-known “ball of energy,” he was a staple to every good shenanigan, a couch buddy always in popular demand, a staunch advocate for celebrating mediocrity. A little superstitious at heart, Zac was always getting in on the action of Notre Dame and Chicago sports and he carried his gambling mantra “PVO” (positive vibes only) into all aspects of his life. He never sweat the small stuff and loved to “thank God tomorrow’s Sunday” on Sundays of three-day weekends, a reminder to relax and live in the moment. Zac made life better. He made us better. We will never forget the happiness he gifted us. He had such a positive and infectious outlook on life. We look for students who share in his optimism and want to share it with others. Never shied away from standing out from the crowd. Zac loved when his friends had fun. Loved seeing people at their best and helping them get there. Hated seeing a friend unhappy. If you were lucky enough to be among Zac’s friends, you know that he was loyal to a fault. He had your back like no other friend could. You were just way too important to him for Zac to see you suffer in any way. He loved anything that had a derivative based on fun, happiness or positivity.

Zac was the ultimate challenger; his favorite pastime was mastering the gift of argument. Zac felt a natural obligation to push others out of their comfort zones, and he also gave others opportunities that would challenge them and exceed themselves in some way. He had the charisma, strength, persistence, and endurance to persuade others to pursue all kinds of endeavors—from starting a company, to supporting a cause, to resolving conflicts and making peace. An unsung gift of his challenging demeanor was that Zac was the ultimate mediator, often bringing resolution to conflicts in a calming manner or reconnecting friendships in a way that only he could. And perhaps above challenging others, Zac loved challenging himself. Whether it was working on new and innovative ideas for work, training for a half marathon to improve his physical health, or strengthening his relationship with God and taking steps to boost his mental health, Zac was always focused on making himself a better person. Zac loved sports and anything that involved a bit of competition. When he chose something that he wanted to get better at, Zac threw himself at it and went all-in. He was a self-master of sorts, determined to be the best at every endeavor, from pickleball to local politics–which Zac called “sports for grown-ups.” Zac was a smart, adept consultant, and his earnestness, dynamism, and competitive spirit made him an asset to any political campaign. But more than that, Zac liked to compete with himself to get better every day. His commitment to his annual Movember fundraiser was relentless. In fact, after hitting his fundraising goals for the year, Zac would often continue to increase them to raise the most money possible in support of men’s health–a cause he held near and dear to his heart.